Attorney Stranahan’s thirty-seven plus (37+) years of experience, his ability to network with experts in appropriate fields, and his knowledge of the Court procedures enables him to achieve maximum results without unnecessary delays.

Attorney Stranahan has also attended many seminars on Elder Law and has achieved expertise in Estate Planning, Wills, Trusts and Estate Administration. He writes many Wills, Power of Attorneys and Living Wills for clients each month. His years of experience and ability to explain Court procedures to his clients make for a smooth process of handling difficult Estate matters. If necessary, Attorney Stranahan also has the trial experience to litigate in Court.

Recently, Attorney Stranahan had the opportunity to negotiate the settlement of an insurance claim for a local businessman who had his inventory damaged in a truck accident along Interstate 80. The insurance company for the trucking company that struck his vehicle and trailer is located out of state and became impossible to deal with for the businessman. After contacting our law firm, Attorney Stranahan successfully negotiated a settlement which was exactly what the businessman wanted. He contacted experts, appraised the personal property that was damaged, and received a settlement in the amount of $278,000.00 without the necessity of going to trial. The fact that our firm handles expensive litigation allowed us to negotiate this matter, even though the adjusters hired a large Pittsburgh firm in an attempt to defend the claim.

Following the purchase of The McBride Building in Grove City Attorney Stranahan has been assisting their former clients as well as many new clients in the Grove City area. He has helped with Estate Administration, Wills, Powers of Attorney and Living Wills. 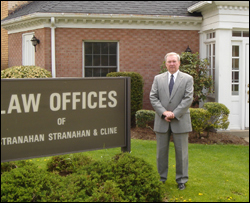 Attorney Jack W. Cline was selected as a TOP 100 Trial Lawyer by the National Trial Lawyers in June 2015 and again in 2016, 2017, 2018 and 2019. This organization is invitation only and is composed of premier trial lawyers from each state who meet qualification as top civil plaintiff and/or criminal defense trial lawyers. Selection is based on a thorough multi-phase process which includes peer nominations combined with third-party research. Membership is extended solely to the select few of the most qualified attorneys from each state who demonstrate superior leadership, reputation, influence, stature and public profile.
www.TheNationalTrialLawyers.org.

Attorney Cline also received a lifetime achievement award given to less than 1/2 of 1% of all lawyers. 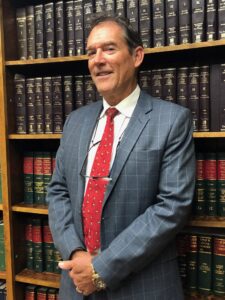 Attorney Metrick has recently been successful in defending against injunctions seeking to shut down local businesses and organizations. In one case, an injunction was sought against a local sawmill by a gas & oil company that claimed the mill’s operations interfered with its pipelines running through the property. Atty. Metrick defeated the injunction, settled the matter and the sawmill experienced no stoppage in operation.

In another instance, a property owner filed for an injunction against a sportsmen’s association in an attempt to shut down their trap shooting range and pistol and rifle ranges, claiming unsafe conditions. Atty. Metrick was successfully able to demonstrate to the court that there was no danger, and the association was permitted to continue to offer shooting services to its members.

Recently, Attorney Metrick was successful on appeal in overturning the Liquor Control Board’s decision to not renew a bar owner’s liquor license. Attorney Gregory D. Metrick argued that his client had already been penalized by the LCB in the form of fines and suspensions, and that he had taken substantial steps toward correcting the issues and has been violation-free for over one year. The Mercer County Court of Common Pleas agreed and ordered the LCB to renew the bar owner’s license.

If an individual is involved in an incident of alleged child abuse, Children and Youth Servicers may add that person’s name to the statewide ChildLine Registry, even in cases where abuse is merely “indicated”. This registration could have far-reaching implications on the individual’s future employment or participation in any activity that involves children. Attorney Greg Metrick has handled several cases against Children and Youth Services, and has recently successfully argued for complete removal of an individual’s “indicated” status from the ChildLine Registry. Appeal of C.A. in re C.R., BHA Docket No. 021-12-0250, 2012.

Seldom are emotions deeper or the stakes higher than in the field of child custody law, particularly when one parent seeks to relocate with the child due to a career change or other circumstances. Beginning in 2010, Pennsylvania law required judges to consider specific enumerated factors when making the crucial decision as to whether relocation is in the best interest of the child. Attorney Metrick has studied these factors carefully and put his knowledge into practice by representing several individuals in relocation hearings in Mercer and surrounding counties. Attorney Gregory D. Metrick recently handled a custody relocation case that has languished for several years before his involvement. In that case, while representing a child’s mother who sought to move from Pennsylvania to build her new family and drastically improve her career, Attorney Greg Metrick successfully argued that it was in her child’s best interest to remain with her. Boughner v. Wall, No. A.D. 2002-616, Crawford County. 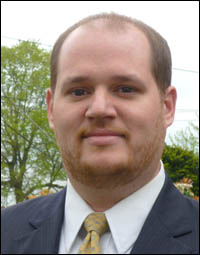 A. Facing Charges for Trying to Buy a Gun?

The right to possess a firearm is conferred upon all citizens by the Pennsylvania Constitution, and the constitution of the United States of America. However, some citizens have had incidents in the past, such as certain criminal convictions or mental health commitments that restrict this right. The forms that everyone must complete in order to purchase a firearm are generated by the Bureau of Alcohol Tobacco and Firearms. They are outdated, misleading and ambiguous, and confusion cause by these forms can lead to serious criminal trouble. If you incorrectly represent your personal history on these forms, even if you have no intention of

breaking the law, you can be charged with a felony offense. Attorney Metrick has extensive experience in representing individuals in defense of criminal charges arising from the completion of firearms transaction forms.

B. Need Record Cleared to Buy a Gun?

Additionally, if you have a criminal record or a mental health record that restricts you from obtaining a firearm, it may be possible to have these blemishes expunged from your record, thereby lifting the restriction. Attorney Metrick has petitioned and appeared before courts representing numerous individuals seeking to clear their record of past incidents that are keeping them from buying a firearm. This expungement law is very complex and is contained within the firearms code. Call for a free consultation with Attorney Metrick to determine if this law applies to you.

Pennsylvania has a strong and distinguished hunting heritage, and many of our citizens view this pastime as a cherished cornerstone of their lives. However, those who have run afoul of Pennsylvania’s complex and sometimes confusing game laws, risk having this privilege suspended or revoked. These laws are enforced by the Pennsylvania Game Commission, and Attorney Metrick is experienced in dealing with this agency in defense of his clients’ valued privilege to hunt in Pennsylvania.